Posted on October 4, 2016 by The Feather Artist

So it has been a long year, and pumpkin season is upon us yet again!

I’ll admit I got a bit burned out last year, and not to mention we had just moved – and things still haven’t seemed to wind down, but I was warned that once you become a homeowner, things will NEVER wind down. ::sigh::  Nevertheless, pumpkins have been on my mind since August hit. But living in the Grand ol’ State of Idaho – we don’t get pumpkins until late September (although one year I got lucky and found them on September 1st….ahhhh, it was like Christmas morning!)…and this year seemed like an exceptionally late pumpkin season for us – so I had to wait………………and wait……………….and wait……………..aaaaaaaaaaaaaaaand wait………for pumpkins……

I even called my favorite pumpkin patch every week throughout September to see if their pumpkins were ready….I think they were getting tired of the crazy pumpkin lady calling all the time. Oh well! A girl’s gotta carve!

But FINALLY! Just when I was about to lose all hope for getting a pumpkin in September this year – I was out running errands one day, and as I was driving past a grocery store, I swear I saw a heavenly beam of light shining down on a display of pumpkins while simultaneously hearing angels sing  “Haaaaah-le-lu-ia!”…….it was BEAUTIFUL….(…I get all teary-eyed just thinking about it….)

Now when it comes to pumpkins, I don’t discriminate; Grocery store pumpkins, pumpkin-patch pumpkins, or the mysterious-pumpkins-that-spontaneously-started-growing-in-your-mother-in-law’s-front-yard (thanks Karen! 😉 ) – if they’re decent quality for 3D carving, I’ll carve em’!

Anyway, I grabbed a shopping cart (grocery store, remember!) and picked up about 8 of them….yep, stuffed em’ all in, and took them inside to pay for them. Oh yes, and people were staring, most likely wondering who the heck this crazy lady was with a huge goofy grin on her face and a shopping cart overflowing with pumpkins in September. But who cares! – I left a very happy camper.

Little did those people know that 2 of those pumpkins were used to carve my first pumpkin of the 2016 season: 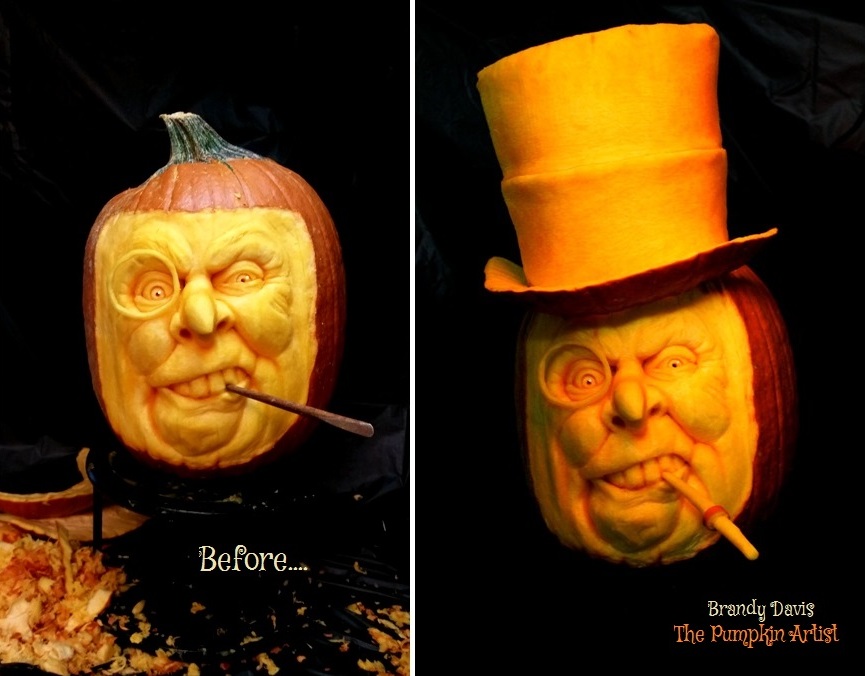 Yep, if you haven’t guessed it yet, that is Oswald Cobblepot, A.K.A. “The Penguin” from Batman. Everything you see is made from pumpkin – including his hat, cigarette holder, and monocle. It took me about 8-9 hours for this one. It’s based off of a sculpture I saw online somewhere, but there wasn’t an artist listed. So if you recognize it, please let me know the artist of the original sculpture so I can give him or her a shout out!

And it’s never easy carving pumpkins while juggling cameras to make a time-lapse video, but I usually always try to film them when I carve. I really love putting together the videos right after. Speaking of that, here is the time-lapse video of this pumpkin being made. (Although, you’ll have to forgive me – I usually try to put as much of the carving process from beginning to end on my time-lapse videos, but this one was cut a bit short. About 3/4 of the way through carving, my camera ran out of space. So yeah….life happens. But I think it still came out ok) Check it out below, and feel free to share it!

So this is only the start of my season. Who knows where it’s going to go from here….but one thing’s for sure…the ball is rolling……or rather, the pumpkin is rolling….. 😉