I’m On A Pumpkin-Roll This Year! – Here’s ANOTHER Time Lapse Video!

Posted on October 5, 2016 by The Feather Artist

Ok, crappy joke of the day aside, let’s get down to the fun part!

For the past 3 years Good morning Idaho has asked me to come in on Halloween morning and carve a pumpkin live during their 3 hour show, which I did love doing.

And it doesn’t really seem all that difficult, does it? Show up and carve, and answer a few questions in between time….until you find out that their show runs from 5:00am-8:00am. YIKES! Good morning, indeed, Idaho…..but I guess that’s what you get with a state full of farmers that have to get up before the sun does. 😉 (Hey, they grow my pumpkins, so I’m not complaining! 😉 ) And not to mention, I have to leave at 3:30 in the morning so I can get to their station to set up at 4:00am and start promptly carving by 5:00am. Like I’ve said before, it’s a labor of love. And generally when I go on their show, I’ll also have a finished carving to take with me to display while I carve the other one. 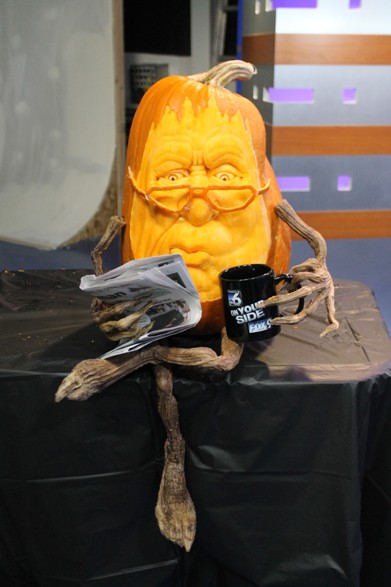 – It only took me about 3 hours to do, BUT, did I mention that I didn’t start it until 11:00 at night (I had to carve other pumpkins for other events earlier in the day), and I finished it at about 2 in the morning, went to bed, and then had to be up at 3:30am? Haha.  Yeah, not sure if that’s called “ambition” or just sheer “craziness”…..probably a bit of both.

And thankfully I still had half-a-mind intact to think it would be a good idea to record this carving. I didn’t intend on making a time lapse video with it, but I did anyway because I just love making them.  I didn’t have time to post it last year before Halloween was over, so I saved it for this year. So, having said that – Happy Halloween! 2016! 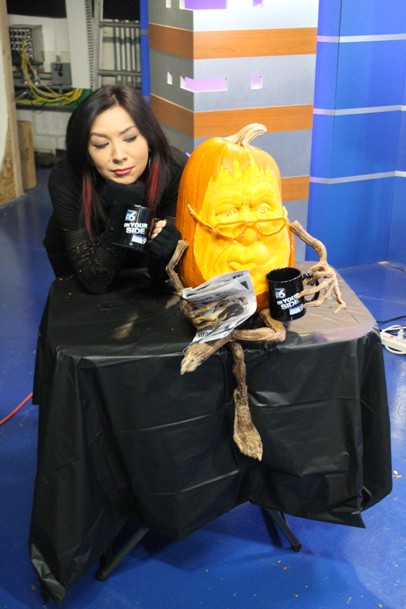