The Pumpkin Artist Carving on the News!!! PLUS More Pumpkin Carving Photos!

Posted on November 3, 2014 by The Feather Artist 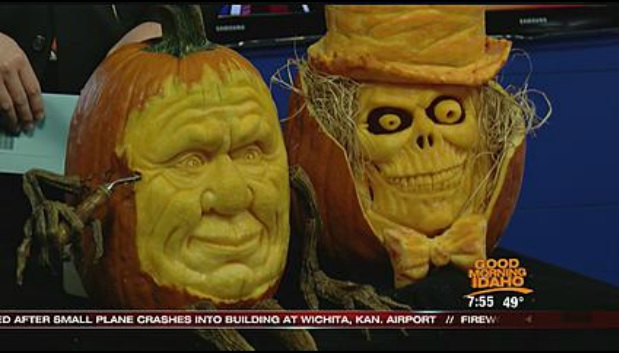 Last week was an incredibly busy week for me – carving, carving, and MORE carving! I was carving some pumpkins for a couple of news stations as well as various businesses. It has been one extremely busy pumpkin carving season (and even after Halloween, it STILL isn’t over for me. Yikes…what did I get myself into??? 😉 ) Here are a couple of clips from some news stations that featured me and my carvings. I will add more clips as they become available.

For those that don’t know, I was invited by Good Morning Idaho to do some live pumpkin carving on their show. To do the segment I was at the studio by 4:30AM Halloween morning, and was ready to go by 5:00AM when their show started. They gave me a little less than 3 hours to carve a pumpkin for them live on their show. I was actually done early, with a lot of time to spare, but I just dragged out adding details and cleaning it up for a while until the end of the show. Besides, when it comes to being an artist, your work is really never finished…with pumpkin carving specifically, there is always another wrinkle to be added, or another line to cut a bit deeper, etc.

But anyway, I’ll quit chit chatting, and you can see the segment for yourself below. The clip below is just snippets from the beginning and end of the show. In between time they would stop to interview me about every 30 minutes or so, and they would cut to clips of me carving before they went to breaks, but they cut that from the online version. Even though it was early, I really had a lot of fun!

I have temporarily removed this playable video from my website – it kept autoplaying whenever I would open up my website, and I couldn’t figure out how to turn off the dang autoplay option, and it was really annoying….so yeah. 🙂 Anyhow, here is the link to the video: http://launch.newsinc.com/share.html?trackingGroup=69016&siteSection=ndn&videoId=28080167. Check it out if you want – It’s pretty cool.  If I ever figure out how to stop the video from autoplaying, then I’ll include it in again. )

This clip below was filmed in the middle of October by a whole different news station. It was just a fun little clip they aired during their evening news.

And here are some photos from each event:

This is the Good Morning Idaho crew. They are very nice, and incredibly funny (especially when the cameras go off. 😉 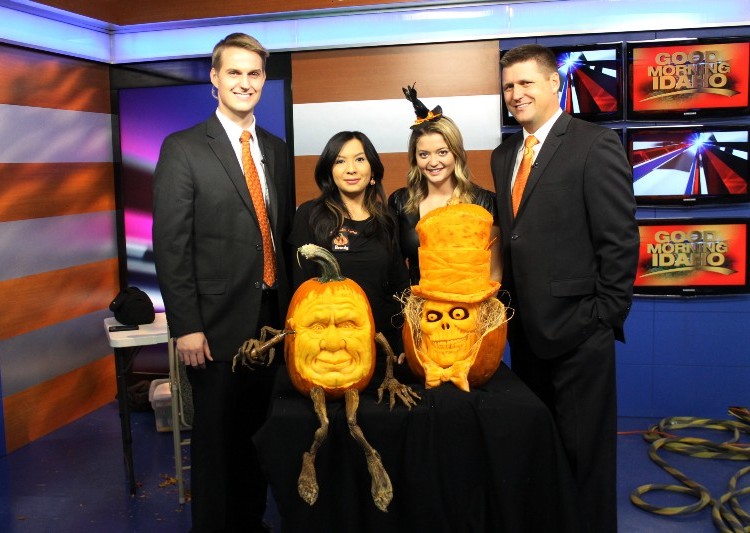 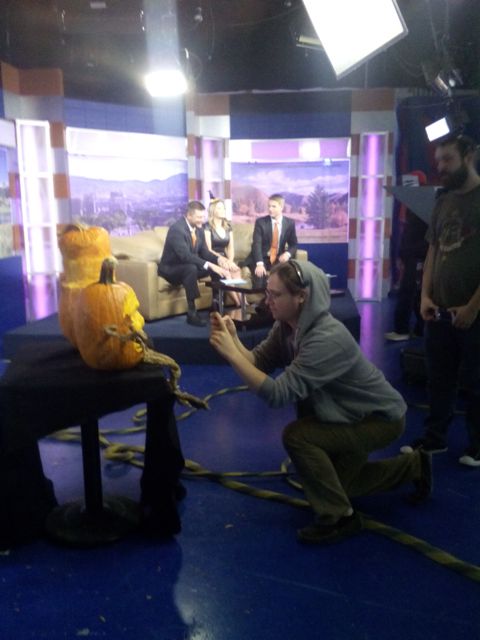 These are the pumpkins I carved for Good Morning Idaho. The little guy on the left was carved live on their show, and the creepy-looking guy on the right I carved the night before. I love the faces on these guys. The guy on the right took 3 pumpkins to construct: 1 for the face, one for the hat, and one for the collar. Although, I really wish I could have worked on that hat some more, but since the pumpkin was getting so thin I had to end up abandoning the idea half way through. It was literally hanging on by shreds in some areas, and it was slowly starting to give away. So I couldn’t create that “fabric-y look” on his hat like I had originally wanted. It still looked cool from a distance though. 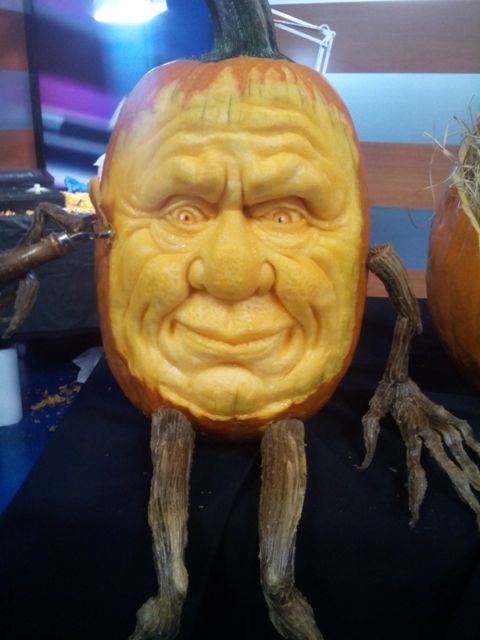 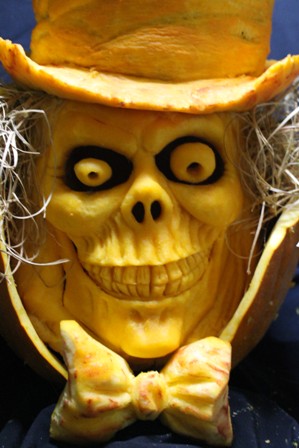 And here’s a shot from my interview with KTVB Channel 7 (the second video clip): 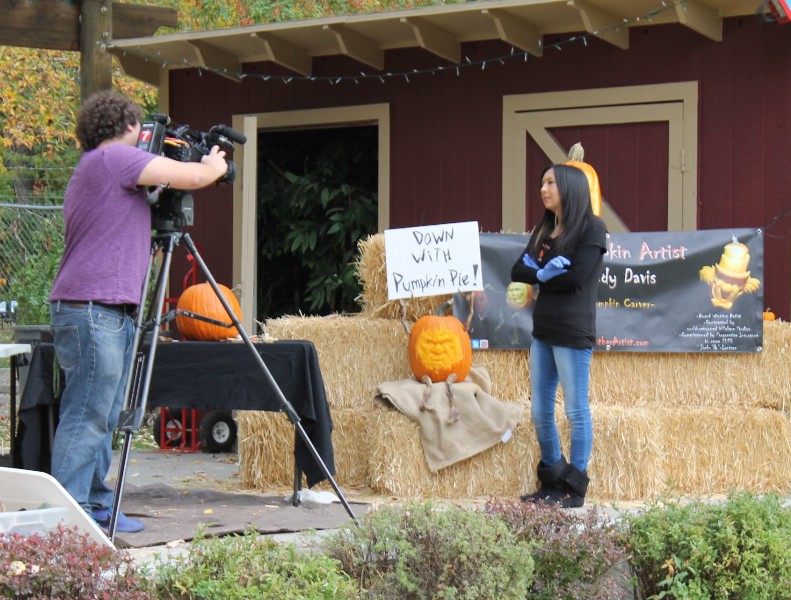 Lastly, (this has nothing to do with news interviews) I wanted to share another pumpkin I carved this year  – it was a revisit of a pumpkin I carved last year. However the pumpkin I used last year was unripe, and terribly thin. It was almost pointless to carve the pumpkin last year, but I wanted to get the practice in.  Having said that, the end result was OK, but it still begged a do-over. The pumpkin this year was a lot better to work with, and this is the end result: A weird looking face.  😉

Again, like I said earlier, it is now officially 3 days post Halloween, and I am still not through carving yet.  (I stocked up on pumpkins right before Halloween for a cool project I have in the works). I currently have 14 uncarved pumpkins hanging out at my house. ::sigh:: Sometimes I wonder if I am I am either ambitious for doing this, or just crazy….I am beginning to think I am a little bit of both. But having said that, I wouldn’t have it any other way.

I hope you all had a Happy Halloween! I know I did! 🙂