I will now pose a serious question to you…A question that has been plaguing artists for centuries….A question where the answer can make or break any chance of an artistic career:

Do you ever doubt yourself as an artist?

Think about that for a second……Do you ever feel like your art isn’t good enough, or that someone else’s art is better, so you tell yourself, “Why bother?”  Or do you start psyching yourself out with thoughts of failure or ridicule?  Or even worse, do other people doubt you as an artist, and you let it get to you so much that you start to believe it?

Well, good news! – I have a simple solution for you that will solve your problems once and for all!:

Stop it! Yep. Just stop it. Plain and simple. No magic formula here; Just magic words. Repeat them to yourself every time you find self-doubt creeping in again. “Stop it.” And then shake it off, move on, and finish what you originally started.

So you’re probably thinking, “C’mon! How could it possibly be that simple!?” Well, it is that simple, but you’ll find that we, ourselves, are the one’s that tend to complicate things with our thoughts of fears and what-ifs. Well, consider the quote below: 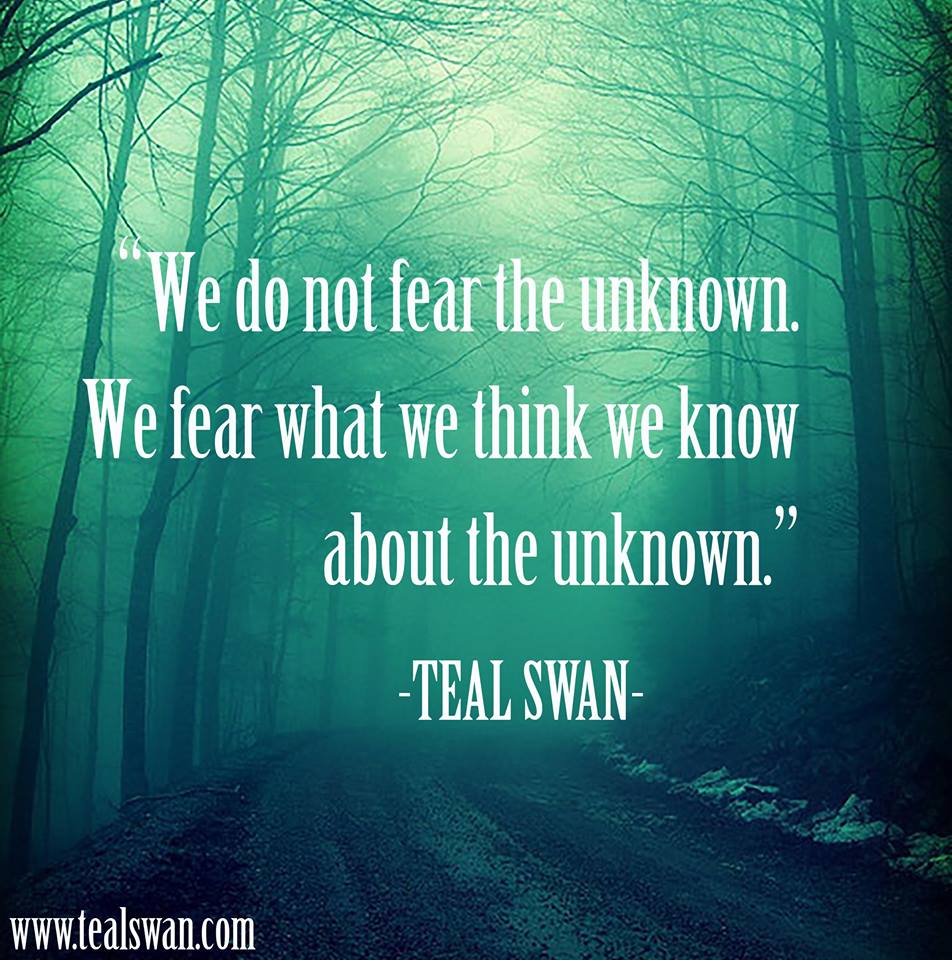 Yes, let that marinate for a while…………………this is the root of all self-doubt.

And while you are doing that, I will also add that we often get an earful of what others think they know about the unknown, or rather, our personal unknown…and in summary, they believe that because of their fears (legitimate or not), we should give up our crazy artistic pursuits and take a more “conventional” approach to a career, or life in general….

But, that brings me to the next quote, which is one of my all-time favorites: 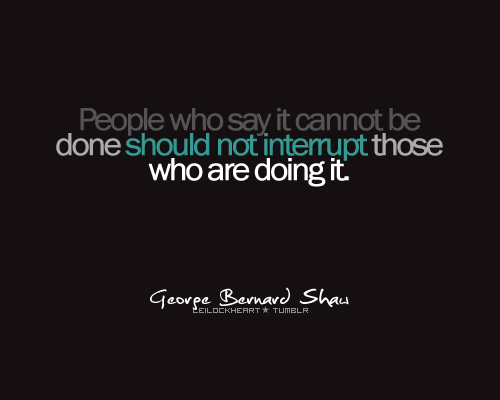 Boom! (Now go and actually be the one who does it!)

Now I would like to share a personal experience with you that illustrates the very concept of that last quote. Although it is quite humorous on the surface, it really set the tone for me for the rest of my artistic career. It also totally changed my outlook on how I handle doubt in my artistic career.

I remember back in late 2006 – I was still finding my niche in the art world. I was newly married, had no kids, and had an abundance free time aside from my job as a traveling art instructor.

Back where I used to live, the county fair used to come around in October. I vividly remember back in late September of 2006, an ad came on one of my favorite radio stations – they announced they were sponsoring the contest for Grand Hat Days at the Big Fresno Fair on its opening day. The most GRAND hat would win $1000 and free Me N’ Ed’s Pizza for a year. (Now, if you grew up where I did, you would know that any prize consisting of Me N’ Ed’s Pizza was a prize worth it in itself…the $1000 wasn’t a bad incentive either….) 😉

As soon as I heard that announcement on the radio, I just knew, not hoped, but KNEW that I could win this thing – there wasn’t a doubt in my mind. I never even gave it room to creep in. Even though I had never made a hat before, let alone a huge whimsical one, there still wasn’t a doubt in my mind. Now, for those that don’t know me, I am no Miss Cleo, nor did I have any special inside information as to what the judges would be looking for. I just knew what I was capable of making – that was all. My imagination was the limit for me.

So I grabbed my sketch pad and came up with this little beauty, or rather….this drawing is more like a “beast.” Remember, this was almost 10 years ago. The drawing is definitely a bit rough, and actually reminds me of drawings I did in high school – but whatever – I was excited about it, and that is the key! 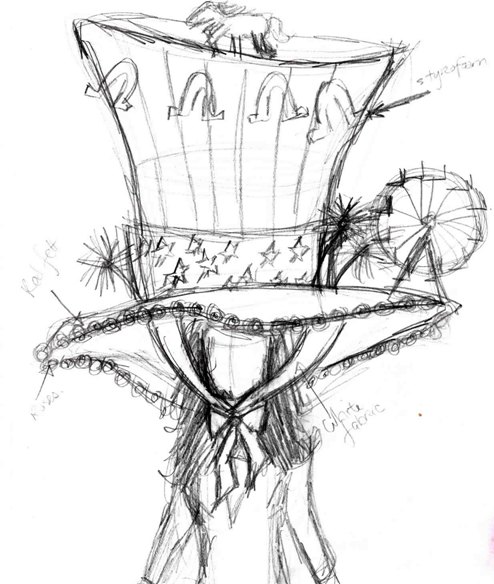 And then within minutes that idea evolved into this: 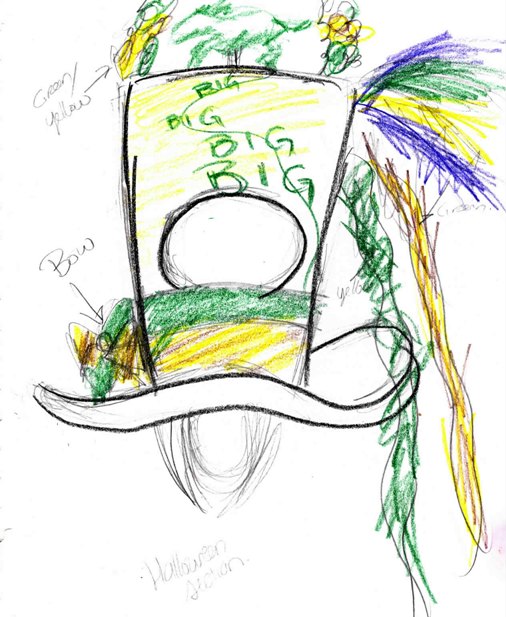 I’m not sure why I kept these sketches – but I’m glad I did.

Ok, so yeah – this idea of this hat was no doubt a freakin’ mutated abomination to hats, and a definite stretch of the imagination. But C’mon! – I mean, after all, it wasn’t called Mediocre Cute Hat Day – It was called GRAND Hat Day for a reason! I was going GRAND!

That same day I ran to the nearest craft supply store and bought everything I would need to construct this monstrosity of a hat. I have to admit, because I had never made a hat in my life, to jump into the world of hat making to this degree may have easily been misconstrued as pure craziness on my half, and rightly so. But, that brings me to my next philosophy – there is always a method to my madness.

So imagine if you will, my poor husband coming home that evening to me sitting in the middle of our living room in our tiny apartment, armed with a glue gun in one hand, and balancing the foam frame of this humungous hat in the other, surrounded by scraps of fabric, tape, felt, glue, glitter, feather boas, and who knows what else, all sprawled out all over our living room floor.…

As soon as he opened the door, his mouth dropped and his eyebrow went up and he said, “WHAT are you doing?….” I quickly explained how I heard the ad on the radio and decided to make this hat to win $1000 and free Me’ N’ Ed’s Pizza for a year. And as soon as I said it, I immediately knew how insane I sounded, and I was ready for the piercing objection that was obviously headed my way. He just stood there with his eyebrow up and said, “Well, I think you’re crazy for doing it…I think you’re just wasting your time, but whatever…” (PHEW! I got off easier than I’d though!) I just confidently told him, “you wait and see…..” (Again, there wasn’t a doubt in my mind).

(See, now keep in mind that I have gotten that reaction from him many-a-times since then when I start these crazy new artistic ventures….::cough cough:: pumpkin carving ::cough cough::…..But really, I can’t blame him. My husband was probably wondering what the heck he got himself into by marrying me, and he probably still wonders that on many occasions. He’s definitely been  more patient and understanding than I deserve sometimes. 😉  But as I said, there is a method to my madness…something he has slowly come to accept over the years. )

Back to the story – A couple of days went by and my grand hat was almost ready to go. My husband was now well into the “laughing-in-disbelief-that-I-was-actually-going-through-with-this” phase. Now, let me put the size of my hat into perspective for you, I couldn’t stand straight up while wearing the hat inside my apartment because the top of it was smashing into our ceiling….and it probably weighed a good 10-15 pounds at the least. (And there still wasn’t a doubt in my mind…..it was just pure excitement at this point for me.)

So the day came, and my husband had to work, so I had my dad accompany me to the Grand Hat Days contest at the Big Fresno Fair that morning, with my huge hat in hand, or rather, in arms. I even had to have my dad help me lift up the hat so I could put it on. Unfortunately he had to get to work too, but he wished me luck and I walked over to the contest alone with my huge hat and anxiously waited with the other contestants, and still, not a doubt in my mind!….: 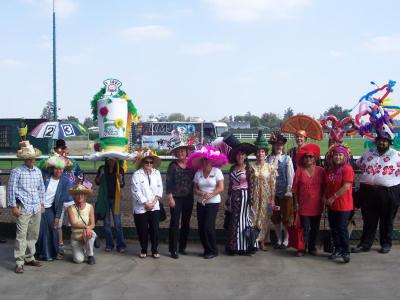 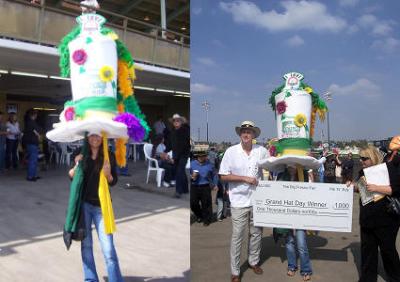 Yep, yours truly!  Winner of $1000 and free Me N’ Ed’s Pizza for a year! I got a big poster board check and everything! (Although, there was no abundance of actual pizza or boxes present like I’d imagined…bummer….But at least they gave me vouchers with pictures of pizza – close enough). And the best part – can you guess who the first person was that I called to rub it in his face! Haha! (I say that semi tongue-in-cheek….but I was pretty darn proud of myself! ) 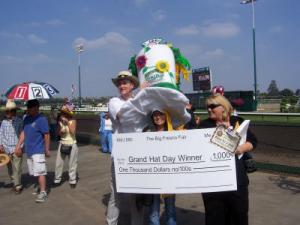 Again, the reason I’m telling you this story is not to brag, nor to profess my love for Me N’ Ed’s Pizza. I wanted to share this story because that experience has been my go-to model for how I pursue all of my artistic ventures. Like the title to my post suggests, there is a theme here throughout all of this – Never a doubt! And if doubts start to creep in via you or someone else, simply “Stop it!” “I’m busy pursuing a passion, so don’t interrupt me. Thanks” 😉

Similar to creating that hat for the contest, a lot of people thought I was crazy for pursuing professional pumpkin carving, or starting a blog, or starting a YouTube channel, or pursuing other recent ambitious art goals (more on that later). Don’t get me wrong, I’ve had plenty of support too. But regardless of any kind of support or opposition you have, as with anything in life, you have to be confident in yourself and know, without a doubt in your mind, that you can achieve whatever goal it is you are after. You can achieve that vision in your head and bring it to life.

Regardless of what anyone says, or doesn’t say, and regardless of any obstacles you may face (because there will be many) – just keep moving forward, keep dreaming and imagining, keep stepping outside of your comfort zone and pushing your limits, do your best, and remember the exciting feeling you had when you first started a project – that is your passion, it is your fire. Follow it – without a doubt in your mind, and enjoy every second of it. Replace your fear with curiosity, and replace any doubt with excitement and passion, and go for it!

Lastly, I would like to leave you with this – it is a quote I have always been drawn to since I was a teenager in high school. I was never sure of why until now: 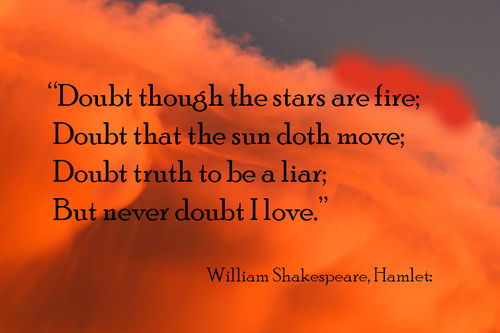 But I would like to change that ending just a bit to get my point across here (no offense, Shakespeare. You’re awesome!):

Doubt though the stars are fire;

Doubt that the sun doth move;

Doubt truth to be a liar;

But never doubt my passion,

For it will move mountains….

And this I leave you with until next time….  🙂

2 Responses to Art and Confidence