Alright! Enough with all the cutesy-schmootzy pumpkins! Time to get down to business (Like I said, I wasn’t done making pumpkins yet this year! And I still have more to go!).

I had been wanting to do a Batman pumpkin since last year, but there had always since been a reason (excuse) to never actually do it: Never had enough time, or never had the perfect pumpkin for it, or never really had the confidence to take on such a task.  This year, however, the stars have aligned, and this is the result.

The carving is based off of an amazing Batman sculpture by Andy Bergholtz. My pumpkin version of Batman doesn’t look exactly like his, but I really didn’t expect it to – Variations in pumpkin depth and height can definitely put some limitations, or at least alterations, on a design if you have something in mind. The area around the mouth and jawline were getting pretty thin, so I didn’t get to push it as far back as I had wanted, so it’s not as refined as I wanted – but it still looks pretty cool.  Also, I am still learning/practicing how to make the “muzzle” area of the face – which is the most difficult area for me, but I am getting it, slowly but surely. 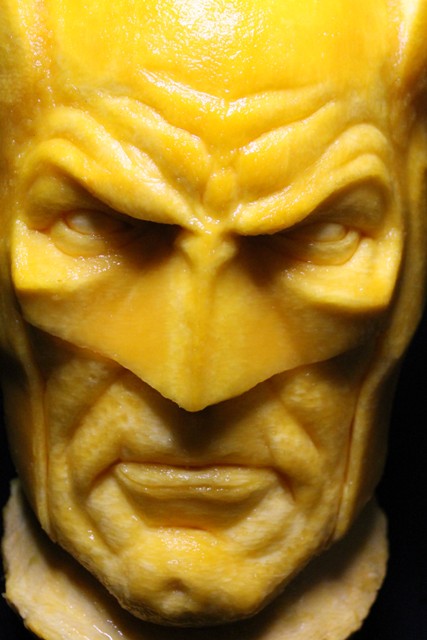 And as always, I left the original pumpkin stem on. Some people have asked me why I didn’t remove it, and my answer is simple – “Because then it wouldn’t look like a pumpkin!”….or at least it would take a lot longer to figure out.

I always want to keep the “pumpkin-feel” alive as much as possible.

Also, I got a chance to film most of this pumpkin carving process, but since it is taking forever for the files to upload to my computer, I’ll have to post the time lapse video later today – So check back for that! I’ll be pretty cool!

Anyhow, for now, please enjoy the photos above, and feel free to share them! Happy Halloween!