So this is my latest sculpted pumpkin: “How the Grinch stole…Halloween?” 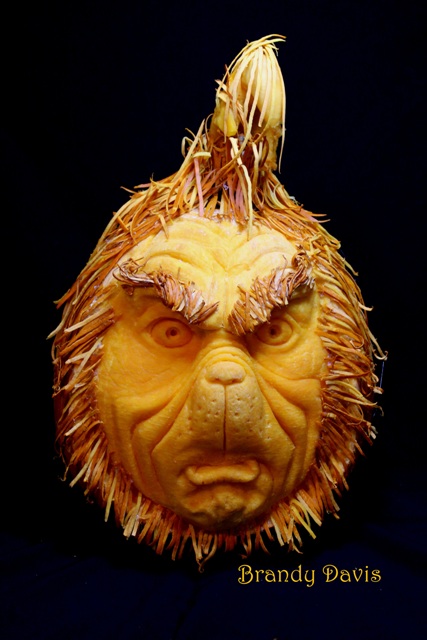 “How the Grinch stole…Halloween?” 3D Pumpkin Carving by Brandy Davis Note: The only part that is Photoshopped in the second picture is the coloring of the image on the right. No other alterations have been made. I could have “painted” the actual pumpkin, but I wanted to maintain the pumpkin look. Having said that, he is the “Grinch” after all, so I only owe it to him to make him green somehow. 🙂 (I still think he looks a bit like a lion without the green color)

This pumpkin took me about 9 hours to complete with the “hair” taking me the longest, although that is just an estimate since I lost track about halfway through. I also got a few battle wounds from this pumpkin via some pumpkin carving tool mishaps…but it was worth it! 🙂

This was my most challenging pumpkin to carve for numerous reasons, and I wish I had more time to put more details on him. But I’ve said it once, and I’ll say it again – sculpted pumpkins wait for no one. They dry out very fast!

Sadly, although he has only been finished for a few hours, his “hair” has already started to wilt and shrivel. For lack of a better explanation, he is starting to look like he has a perm! haha. So a note to all of you pumpkin carvers out there – Remember to immediately take LOTS AND LOTS of pictures of your completed pumpkin because in a few days (or in my case, a few hours) it will never look the same again!

But maybe I’ll stick him outside anyway since it is currently colder outside than it is in my refrigerator! Yikes!

I did film some of the carving process for this pumpkin. I’ll review the footage and see if it is enough to justify a YouTube video – I hope it is!  I’ll keep you all updated as to if I when I will be posting the video, so stay tuned!

Hope you are all enjoying my carvings and have a Happy Halloween!